I ordered a 7 wood from One Iron Golf. I did not measure the length correctly and they sent me an email to verify the length I ordered. They wanted to make sure I measured correctly. I had made a mistake and I am so happy they questioned it. They made the club just as I had ordered it and I couldn’t be happier. I hit this club squarely the first swing and it is now my go to club from 150-170 yards. I would recommend this company on any club purchase. Plus it shipped to me earlier than I thought it would.

N
Blackstone Irons Nick C.
I’m happy as can be!

So I started playing in the spring of 2021…. I become obsessed with stuff when I get interested. I have had 3 major back surgeries so I wanted same length irons and extra tall clubs because I struggle to bend at the waist or turn my hips. I’m 6’4 and wanted extra long clubs. I stumbled onto 1 Iron and I’m glad I did. I bought the full line of Blackstone, all the wedges, the Driver and putter as ling as I could get them. I’m dropping strokes the more and more I become comfortable the better I’ve become.

May not seem like a lot to more experienced players but I shot a 43 today on 9. I had a terrible first hole and rimmed 3 putts. I realistically could of had a 40. I had a 290yd Drive. I’ve only been playing for 15 months. I’ve had my 1 Irons since Christmas and live in the Midwest so I didn’t start using them until April, three months ago.

I play 3-4 times a week and the pic of the clubs is after about 25 rounds. 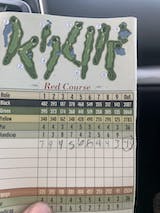 Very happy with the set. Being shorter, I never thought about single length clubs. Have reduced my average round by 10+ strokes over the first six rounds. Absolutely love the woods, fewer slices to deal with! Thanks!

The head covers are great!! No more noise from the irons banging into each other and they keep the irons from getting dinged up. Well worth the price.

I am very pleased with my new 1 iron golf iron set! I’m hitting the ball straighter and more consistently right off the bat! And their customer service has been spot on! Had a small issue, and they took care of it right away! I would recommend these clubs to anyone looking for a change!

Been told to take the traditional 3w,3i,4i,5i, and LW out of bag since I have a slow swing speed (85) and high handicap. This all flew out the window when I bought the Pro-Lines (Drv/3w/3i-LW). I can now hit these Pro-lines so easily; all of them! Gained so much confidence now that the setup is the same through the irons. I follow the Graves Golf SPS method, and this set is perfect for it. Following the GGA Alignment and Ball Position Trainer to set up irons like a 7i and matching the 3w and Drv setup. Grips and lie angle work perfectly as per GGA recommendations. The LW is incredible and so much easier to hit than a traditional length club that I've been using it for most pitching and chipping shots. I gained 40 yds on my driver, 30 on 3w, and 10 on the irons. First round with this set and I dropped 10 points! Love these new clubs!!

I've played 5 rounds with my pro-line irons, and I'm totally pleased with them. I love the feel of these irons. I've been playing golf for 30 years and have owned 7 sets of irons, and these pro-lines are by far the best. I purchased the 3 thru PW, and I'm going to order the SW, GW and LW. These irons feel like butter, and the distance that I'm getting is amazing. I wish that I would have gotten these irons years ago!

This is a golf company not a store. Review return policy carefully. If you buy a demo or used club they not returnable.
You cannot try the club but steel shafts have less flex than what you expect from a fiberglass shaft. Be careful before you buy.

Thanks, Ted, for taking the time to review your purchase. As we discussed privately, I apologize for your experience. We try to make it as clear as possible that all used/demo sales are final, we even have a box that is required to be checked acknowledging the return policy before we enable payment processing during checkout. Hopefully your review will provide one more means for customers to see our policy! Our NEW clubs all share the 30-day money back guarantee for you to try them at home for a full month, but used/demo clubs are clearance/final sale (yet still fully covered by our limited warranty). Thanks again!